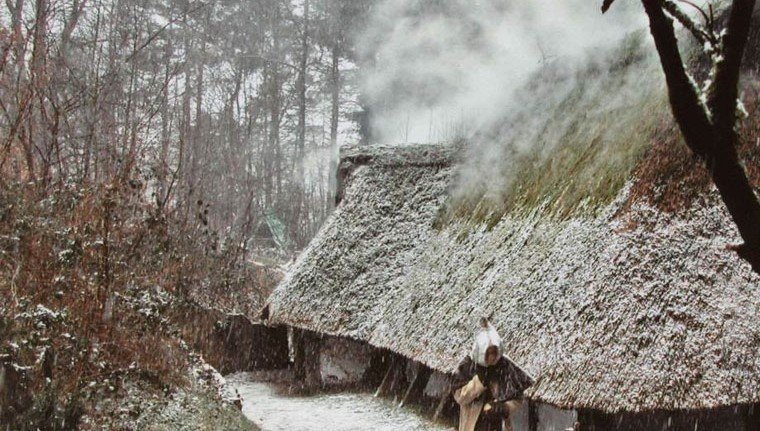 The Neolithic, as the time when farming was introduced to Ireland is called, took place 6000-4500 years ago. The arrival of farming - in Ireland, inevitably involving sea travel - marked a significant change in the everyday lives of people.

Instead of being dependent on what the environment provided naturally, often involving seasonal movements for food, people became more settled in one place, weeding and tending to their own animals and crops. They thereby also created new and different relationships to the land. This new way of relating with the land also meant that they created new rules, new traditions, new rituals and also new ways of being at certain times of the year. Festivals and gatherings were probably conducted around planting, sowing and harvesting (as they still are).

More elaborate rituals would have surrounded great life events such as birth, initiation and death. It is obvious that the Neolithic was a lot more than just a new way of getting food on the table – it also involved a new way of thinking, a new way to relate to the earth, to people, to animals, to life and to the ancestors. This was also the time when people for the first time started to build large-scale permanent ritual monuments often of stone and with such durability that they are still standing today, some 6000 years later. County Sligo is particularly rich in such sites, as a range of different monuments were built in this part of the island. What is exceptional about Sligo is how many of these sites have lain disturbed since they were built.

Research over several hundred years has developed categories and labels for these monuments, mainly based on their design and the artefacts found in their chambers. Some sites do not fit these convenient classifications. Nevertheless, we can identify monuments of three main types: those of Irish passage tomb tradition, court tombs and portal tombs. Other monument types such as Linkardstown cists, are also being built at this time, as well as earthen and timber enclosures and long rectangular houses. 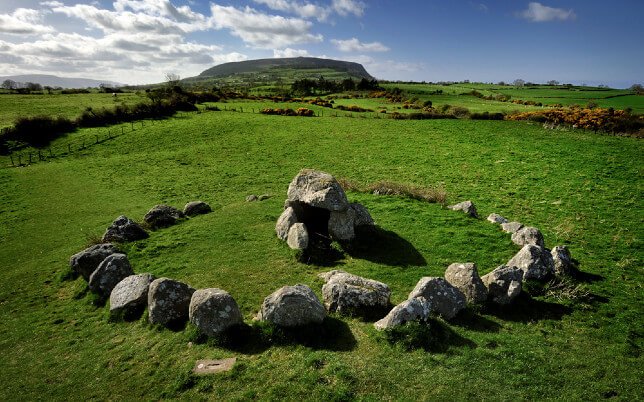 Passage tomb tradition monuments contain a certain set of grave goods (Carrowkeel ware pottery, long pins made from bone of antler, stone balls and pendants) and tend to be found in clusters.  Human remains placed in these chambers may be burnt or unburnt. These sites tend to be circular in form, often accessed by a passage. They are occasionally associated with solar alignments, carvings on the outside and inside of monuments, and constructions ranging from small and simple dolmen-circles (such as the example at Carrowmore 7 over) to elaborate large-scale monuments.

Court Tombs too have a distinctive set of goods that accompany burials. Flint leaf-shaped arrowheads and scrapers, and round-bottomed pottery are typical court tomb finds. Court tombs are built to a more rectilinear plan. They usually have an unroofed ‘court’ at one end or at the central part of the monument, which provides access to the burial area. They are likely to be distributed singly; most face east. Megalithic art is almost unknown at these types of sites. 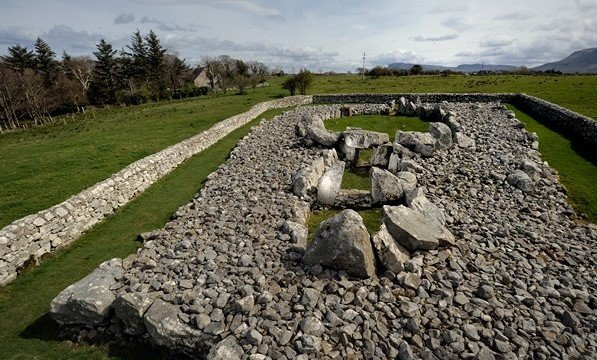 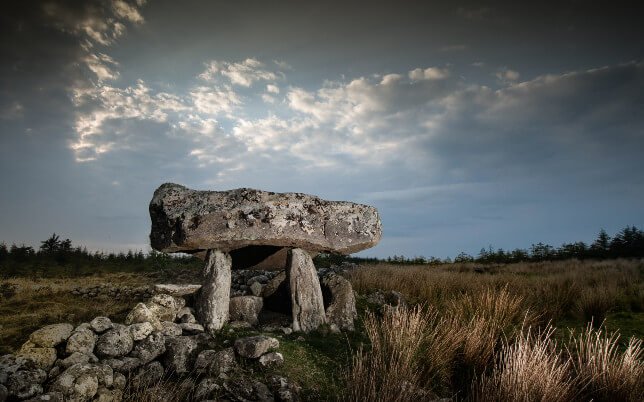 Portal tombs represent a third category of Neolithic monuments. Some of these sites have produced dates among the earliest of megalithic monuments on this island, but share finds to some extent similar to those court tombs. Built with great skill, they usually balance an often quite large capstone on chamber stones, the twin ‘portals’ - upright stones at the front - giving rise to their modern name. They are usually found singly in isolated contexts. Many portal tombs are found in Sligo, such as the wonderfully named 'Tawnatruffawn' also known as 'The Giants Griddle' located near Dromore West (pictured over).

To protect these sites, maintain good relations with landowners, and have a positive experience at these sites, we at Sligo Neolithic Landscapes ask you to: